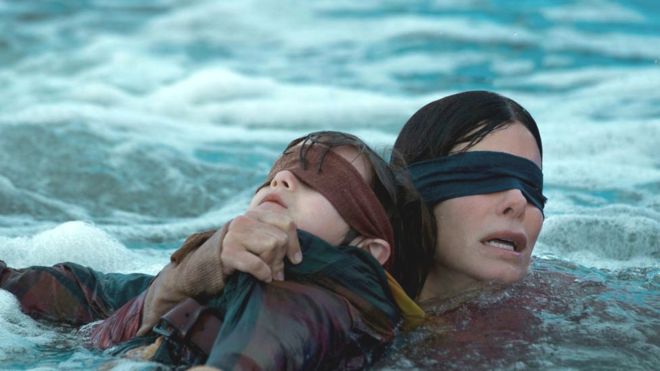 Two weeks ago, when I first saw Netflix’s “Bird box,” I thought it would be easy to write a quick review about it. It seemed like everybody was talking about it: some said it was great and others said they hated it. When I finally sat down to watch the movie, however, I was quite disappointed to find myself in neither category.
“Bird box” chronicles the tragic events that follow Malorie Hayes (Sandra Bullock) after mysterious monsters invade Northern California. These monsters initially have the power to force anyone who sees them commit suicide. Later in the movie, they develop the powers to make characters hear voices encouraging them to look, and influence insane people to force others to look.
During my watching, I thought that the concept of showing someone something so disturbing as to make them commit suicide was scary enough, but the monsters themselves were a little too docile to be frightening. The monsters in “Bird box” are powerful, yes, but they don’t enter houses, break into cars, or do anything, really to scare people. It seems bizarre that the only way for these monsters to deal any real damage is because of human blunder— making the mistake of looking at them.
The most fearful monsters in the thriller and horror genres are those that relentlessly pursue their victims, and though three monsters in “Bird box” pursue Malorie at the end of the movie, I thought it was too little, too late. This is probably why the movie included groups of insane people who wanted to ‘cleanse’ the world and see the monsters win, however, we really only see them act at the end of the movie when they spur Malorie to find Rick and the other survivors.
The novel, on the other hand, treats the monsters very differently, and even speculates that they do not mean to harm other humans. In the movie, Charlie, the supermarket employee, compares them to a ‘culling’ in that they came to erase part of the human race. However, in the book, they don’t go out of their way to make others see them (no whispers, no manifestations of dead family members). The novel focuses more on the paranoia and fear of not being able to see these creatures than it does on monsters tempting others to look.
The “Bird box” film could have taken a similar angle. One of the reasons we watch movies over reading books is that we have the added visual element. Some of the most tense scenes in the movie were when the camera showed us Malorie’s perspective, and the tensity would only dissipate once we see the full scene again.
The failings of “Bird Box” might just result from the film medium. When we see everything Malorie sees, we aren’t afraid, or at least, we aren’t quite as afraid. The “Bird box” novel works because we are as afraid as Malorie is: we share her loss of sight. Because we can’t see anything, we are almost forced to imagine the events that take place in the book and, like Malorie, we end up scrambling to piece together surroundings and events that occur. In the movie, nothing is left to the imagination, and our sense of fear is gone or at least muddled.