The Burlingame B • October 21, 2019 • https://theburlingameb.org/2216/features/the-climate-change-strike-and-what-you-can-do-to-help/

The Climate Change Strike and what you can do to help 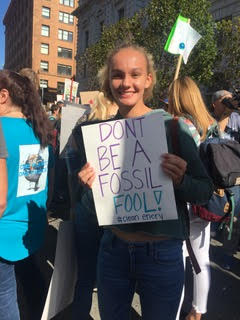 On Friday, September 20th, millions of people around the globe gathered in the streets to protest the lack of action against climate change. Climate change is one of the biggest problems of this generation and while it affects everybody, young people will have to deal with this issue for much longer than anyone else. That is why many of these people were students, and some of them were our very own.

“There were probably thousands of people who came out to support it. Many of the people were also young, which was amazing to see,” said BHS senior Juliana Pianim. “I do think governments and policy makers will have to start making some changes.”

Anna Bronzini, another senior, agrees. “I think that it has a good chance of making a difference in the long term. Because there’s such strength in numbers… [The people in charge] need to know that people have a stake in this issue and that we all really care about it.”

While the strike focused on convincing governments and corporations to change their ways, there are many things that average people can do to help as well. Carpooling, eating less meat, recycling, composting and using less water and electricity in your daily life are fundamental to helping this cause. Those are well known, but there are so many more possibilities. You can actively follow the climate change movement to find out when the next marches and strikes are, or you could join the BHS environmental club, where the aforementioned Anna Bronzini is the co-vice president. The most important thing you can do, however, is vote. Beginning at sixteen, students can pre-register to vote online, and eighteen year olds can register just as easily.

As Juliana Pianim said, “everyone should work together on this issue because it is prevalent, urgent and will affect us in our lifetime as well as future generations.”

Register or Pre-Register to Vote