The Burlingame B • November 21, 2019 • https://theburlingameb.org/2364/showcase/brockhampton-redefines-the-term-boy-band/ 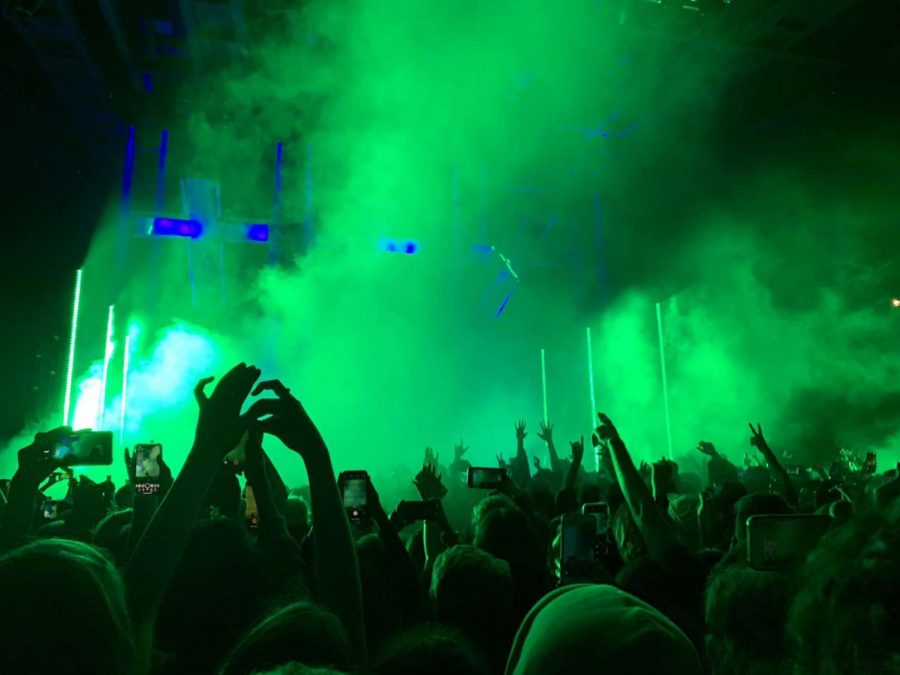 Seven men come on stage wearing bright orange jumpsuits tied at the waist. Immediately, the crowd goes wild. I’m pulled toward the stage by the powerful rush of the crowd as purple lights fill the pit. Cue more screaming. It’s a Friday night at the Frost Amphitheater, located in the middle of the Stanford University campus, and Brockhampton has just taken the stage.

The rap collective had an unconventional take to this concert, starting with their first opener. Often described as an “experimental music duo”, 100 gecs reminded me of a sleep paralysis nightmare. The sheer appearance of Dylan Brady and Laura Les made me do a double-take, and that was before the “music” even started. The two donned long white hair that went down to their waists, creating a deep contrast to the all-black outfits they wore. One wore a mask, covering their face, while the other wore a stylish wizard hat. The only thing on stage with them was a tilting Christmas tree, which they never addressed.

Then they started singing. If you can call it that. “Stupid w****, I just fell out of a Porsche. Oh no!” While the heavy bass and catchy beats initially stirred the crowd, there was eventually a lull in audience participation, perhaps due to the entirely odd nature of the music. The person next to me remarked, “I don’t know how to respond to this,” summarizing exactly how I—and the rest of the venue—felt. The sounds coming from the stage couldn’t be classified as rap, but they also wouldn’t count as club music or anything resembling dance music. It was impossible to mosh to, leaving the audience only to listen to the cheesy and formulaic lyrics that are entirely devoid of substance.

The duo acknowledged their heavily edited music, stopping the show in the middle of their act to say, “I can’t believe we made every note.” This was a nod to the fact that they never once ceased to use autotune, even when they were addressing the crowd. I applaud 100 gecs’s adventurous spirit but condemn their execution.

After a brief intermission, during which bluesy folk music and cigarette smoke filled the air, the second opener came on stage. Slowthai, the politically charged British rapper, brought an extreme tone shift to the concert, especially compared to his predecessors. His presence on stage was unpretentious and straightforward as he walked on in a yellow hoodie and black pants.

While the lyrics were unintelligible, the beats behind them were high-quality. As slowthai started making his way across the stage, microphone in hand, the crowd began to move to the music. He had personality, rhythm, and the audience threw this energy back at him. After his first few songs, he takes a moment to address the crowd, yelling, “Stanford, how we feel? We need better energy tonight!” The venue officially went wild, as mosh pits started to form near the stage. Slowthai took his shirt off and started to progress into hardcore rap as the fans below him went into a frenzy. I was thrown head-first into a sea of people as the crowd behind me rushed the stage.

Amid the mania, slowthai noticed a poster in the crowd. He called up the man holding it, a fan named Alex. Soon slowthai and Alex were rapping together, moving across the stage as if they were a planned duo. Slowthai’s positive presence on stage was reflected by the stirring effect he had on the audience, and the venue was sad to see him go.

Finally, it was time. After another brief intermission, characterized by the smell of smoke and the restless murmurs of the crowd, the lights dimmed. One by one, they came out, wearing their signature orange jumpsuits and bringing with them an air of excitement.

They wasted no time. Kevin Abstract started us off with “St. Percy”, a song from their newest album, “Ginger”. From there, the band embarked on a journey of their popular hits, including “If you Pray Right,” “Zipper,” “Gold” and more. They had a dynamic presence on stage, perfectly balancing the aloof attitude that you’d expect from a band that shot to fame in such a short period of time and a sense of genuine enthusiasm for the opportunity to perform. Each performer had his own signature attitude, demonstrated when they took the time to introduce themselves to the audience. They went down a line–Abstract, Matt Champion, Joba, Merlyn Wood, Dom McLennon and Bearface–all with their own unique identity and sound.

The show was underlined by perfectly coordinated light and fog displays that consistently hyped up the crowd. The music itself was deafening but sounded just like the studio version. The only difference was that I could see the members of Brockhampton rapping along.

While the show got off to a rocky start under the lead of experimental opener 100 gecs, the concert eventually found its rhythm. The energy from the crowd was electric, matched only by the vitality of Brockhampton itself. Overall, it was a night for the books.