The Burlingame B • October 17, 2019 • https://theburlingameb.org/2682/cartoons/duality-of-bay-area-liberalism-and-conservative-ideas/ 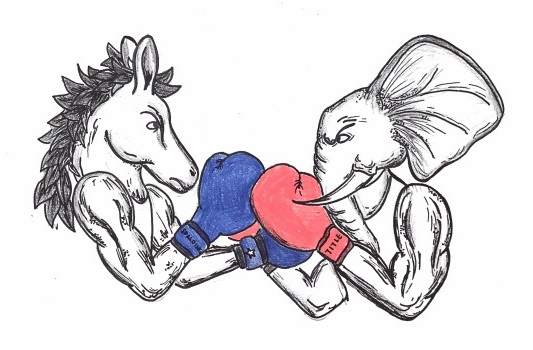 The opposition between liberal and conservative ideas lead to a division in our community.

We live in a bubble. Located right outside San Francisco — a city known for defining counterculture and acceptance in the past century — Burlingame appears to be a suburban utopia. San Francisco’s liberal ideology trickles down into our town, and the mindset of our area creates a perfect mixture of diversity, tolerance and acceptance.

At least, that’s what we keep telling ourselves.

Ironically, living in our liberal area has prompted a widespread conservative backlash. The fight against discrimination has caused those who make offensive comments to automatically jump on the defensive when they are called out for being racist. In this bubble, one of the worst things you could be called is a racist. This sense of preemptive defense has become so ingrained that people will defend their points before hearing the other point of view. The sense of overt liberalism that used to define our area has caused a conservative retaliation that has led to further intolerance and narrow-mindedness.

Burlingame’s subtle culture of intolerance manifests itself in our everyday lives. Whether it takes the form of offensive slurs, insensitive jokes, narrow-minded comments or objectification, our culture of intolerance has an impact on our community. We often try to sweep this under the rug, to avoid talking about it because it gives us a bad reputation. It’s not easy to admit that our community has these noticeable traces of bigotry.

It’s hard to call people out on their bigotry in person, especially when their insensitivity isn’t as blatant as the ten to fifteen sites of hate speech spray painted on our school walls. A slur here and a misplaced comment there doesn’t warrant enough attention. And when you do call people out on it, you’re often met with the same response: “It’s just a joke,” “I didn’t mean it like that,” or “But everyone laughed.” But more often than not, they’ll ignore it entirely, avoiding the question and calling you out on your extreme political correctness instead.

But when you’re a member of the groups that are being constantly degraded, talked down upon, or made fun of, the “jokes” add up. When you hear these things, even when they’re expressed as a joke or as a harmless remark, they remind you of your status in a bigotted world. The people who say these things dismiss them as not being a “big deal” but that’s because they don’t have to deal with the ramifications of their bigotry. The comments and slurs thrown around so cavalierly are indicative of the culture of disrespect and intolerance.

Because we live in this bubble where liberal values appear to define our culture, we have been met with a toxic and bigotted conservative backlash. We often dismiss the faults within our community, assuming that our area translates to instant toleration and acceptance. In fact, our bubble’s reputation has created a sense of isolating (or isolated) self-defense, where people are so afraid to be called bigotted that they refuse to hear ulterior viewpoints.

In order for us to move forward, to move past our culture of bigotry and intolerance, we have to realize we play a role in the perpetuation of these systems. We have to hear the points of view of others, even when they’re calling us out on our behavior. We have to realize that the problem lies within our community and ourselves. We need to stop being defensive at the expense of moving forward.