The Burlingame B • November 19, 2019 • https://theburlingameb.org/2734/editorials/potty-talk-addressing-the-bathroom-crisis-on-campus/ 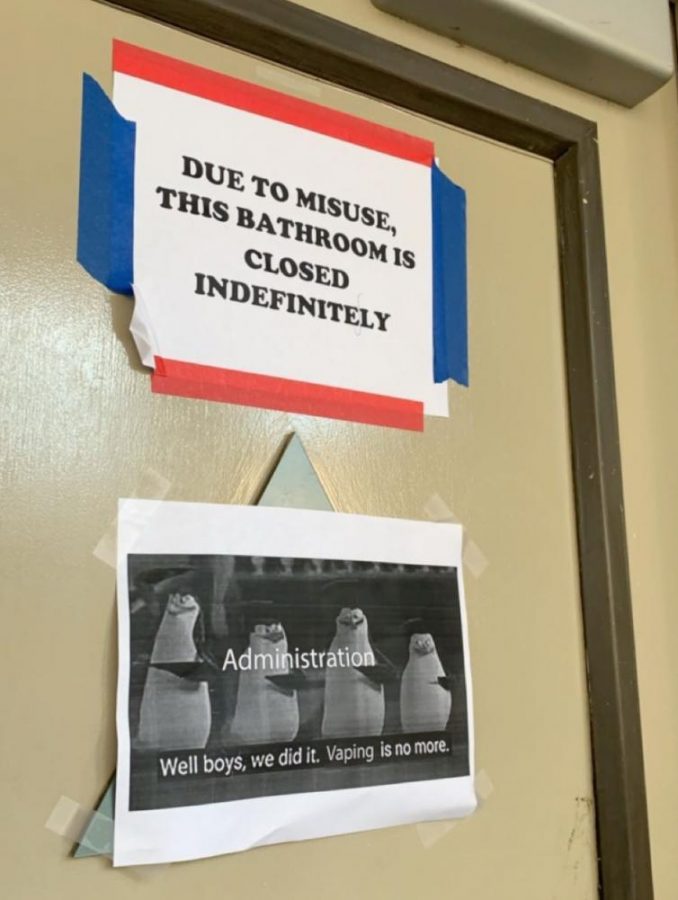 In response to the administration’s sign, students put a meme on the bathroom door of the “administration” saying, “Well boys, we did it. Vaping is no more.”

On Aug. 5, our school was tagged by a slew of bigoted graffiti.

We wish we could say this was an isolated incident. We wish we could say we were surprised when we came to school that morning and saw large trash bags censoring the offensive messages that defaced our school. Of course we were shocked and appalled, but we weren’t surprised. After all, we’ve been here before.

Through a large part of the past century, Burlingame was a sundown town, meaning that all people of color had to leave by nightfall. In an interview with The Burlingame B two years ago, former campus safety specialist Randy Williams remembered growing up black in San Mateo and being unable to go to Burlingame Avenue alone as a child for fear of harassment. Judging by the events at this school, bigoted attitudes are alive and well. Just in the past two years, we have gone through three major incidents as well as thousands of less public instances of slur usage and microaggressions that happen every day.

During the 2017-2018 school year, Burlingame students chanted anti-Asian insults at a basketball game against Mills, a school where 59% of the student body is of Asian decent. The following year, junior Ilan Rosenbaum’s locker was vandalized with anti-Semitic and homophobic rhetoric. Afterwards, the school body barely talked about the occurrence. Besides an article by The Burlingame B and another by the Jewish News of Northern California, no other mentions of the hate crime show up online. And now, barely a semester later, we are faced with another instance of discriminatory vandalism: racist, anti-Semitic and homophobic graffiti spread all over our campus in one night.

At this point, no one is surprised—especially not students of color, Jewish students or LGBTQ+ students.

After the Mills incident, many Asian students were mad, but unvexed. To them, it was simply a public example of what they faced everyday. The events of Aug. 5 were met with a similar sentiment. Many of the people who belonged to the targeted groups felt that this most recent display of bigotted ideas was par for the course. Some were even surprised to see so many people shocked about the vandalism. The words that received so much attention when spray painted on our school walls were the same words they heard everyday in the hallways, the same words that had been thrown around countless times without notice.

Just to be clear, we are not downplaying the significance of this recent incident. We are not saying that our school is racist nor are we advocating giving up. By bringing up our past, we are not attempting to denigrate our school and community. We’re just speaking our truth.

We do have a history of bigotry, and to ignore that fact would be to feed into the culture that perpetuates it. To ignore our history and pass these incidents off as uncontrollable individual acts would be to disregard the experiences of so many of our community members who know – and live – the truth.