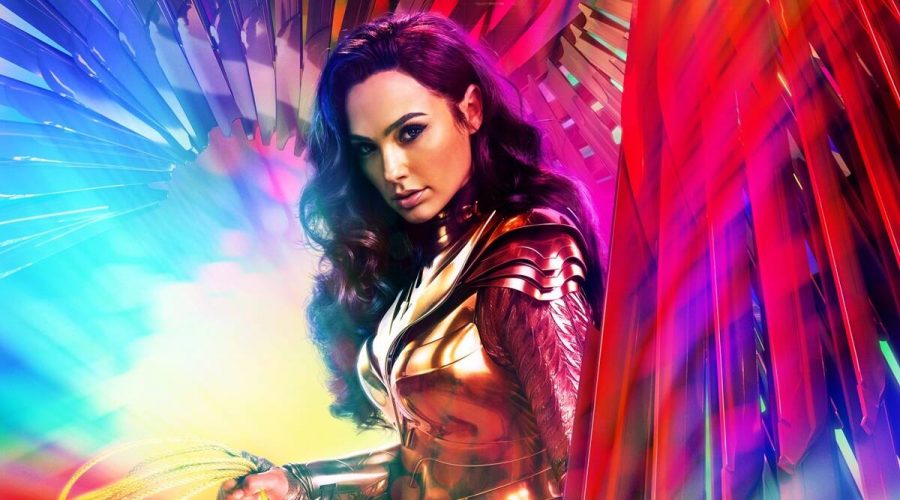 Warner Brothers’ 2020 production of “Wonder Woman 1984” closes out the year with a whimper, not a bang.

In a year starved of movies, I was cautiously optimistic before watching the newest addition to DC’s expanded universe, “Wonder Woman 1984.” Previous releases like 2019’s lighthearted “Shazam!”, the time period the movie is set in and even the colorful poster art led me to believe the movie would be a playful romp embracing the inherent goofiness of superheroes. However, the movie left me feeling underwhelmed. While “Wonder Woman 1984” could have created a new, lighthearted path for DC, it just ended up being another average superhero flick.

In “Wonder Woman 1984” Diana (Gal Gadot) encounters a stone with the ability to grant wishes. When the villain, Max Lord (Pedro Pascal), gets his hands on the stone and is given the ability to grant said wishes, Wonder Woman, and her resurrected boyfriend from the dead, Steve Trevor (Chris Pine), go on a mission to stop the villain, and her friend turned evil, the Cheetah (Kristin Wiig).

The movie is plagued with an inconsistent tone. The opening is weirdly peppy and lighthearted. After a flashback to her childhood, Wonder Woman is shown stopping an armed robbery using her interesting grab bag of abilities, and it stands as an interesting reintroduction to the character. It also creates the idea that Wonder Woman isn’t just some stone-cold hero, which is a great departure from the previous movie. She comes off as a fun person who’s willing to crack a smile or wink at someone she just saved. The action is over the top and silly, which led me to believe that would be the tone for the whole movie.

After the action, we’re brought back to the stereotypical superhero movie. Wonder Woman and her friends spurt exposition at the viewer while introducing plot points that don’t hold enough weight for me to care about. It feels like the fast-paced action and silliness the opening provided has all been brought to a halt in exchange for a jumbled and forgettable story, as well as a big bad mustache-twirling villain with plans to take over the world.

The contrast in tone creates a weird disconnect, in which the rest of the movie wants you to take it so seriously that some of the scenes and characters feel incredibly out of place. One scene features Wonder Woman dressed up in a computer generated suit of armor with a set of wings awkwardly strapped to it, fighting the Cheetah, who is completely CG, and looks terrible. This could have been somewhat forgiven if the movie just embraced the absurdity of what’s going on. A super powered Amazonian lady is fighting a humanoid cheetah, and the movie wants you to take it dead serious. If the movie had a more lighthearted tone, it’d probably be easier to watch.

The time period the movie takes place in adds nothing to the screenplay whatsoever — besides filler nostalgia bait. A full scene is dedicated to teaching Steve Trevor ‘what it means to be living in the 1980s,’which comes off as forced. Considering the title of the movie is literally “Wonder Woman 1984,” why not take the chance to embrace the era a little more? A colorful and goofy tone, featuring a fitting electronic 80s soundtrack could have been an interesting take on Wonder Woman. However, the bland, serious tone basically throws the potential of an 80s aesthetic in the garbage for a single scene.

Wonder Woman 1984 isn’t the worst thing DC has released. But it is by far one of the most painfully average. Without a clear tone, the film feels like it’s fighting itself on whether or not it wants to be campy or serious, which ends up making the movie feel jumbled and non-committal. If you just want a movie to turn your brain off to, this isn’t a horrible choice. However, if you want to actually stay engaged, maybe check out something else.