The Burlingame B • February 10, 2021 • https://theburlingameb.org/3777/showcase/pandemic-gives-burlingame-students-more-time-to-get-back-into-reading-and-find-their-favorite-books/ 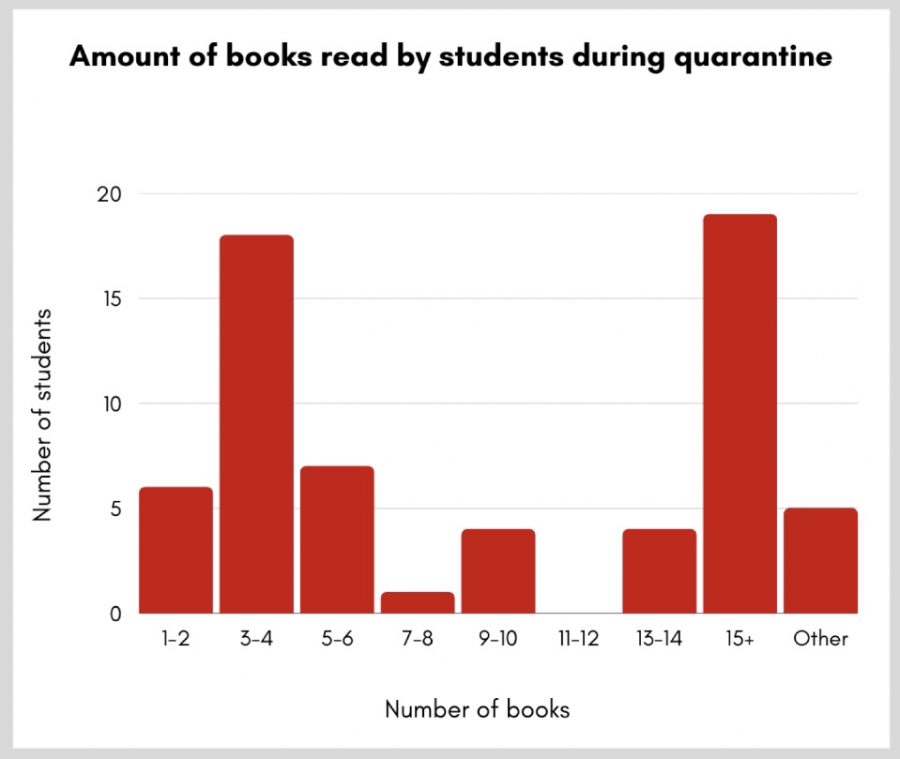 According to a poll filled out by 64 students, Burlingame students read an average of 10 books over 10 months.

Since the beginning of the pandemic, quarantine has given people more free time than before, and people have turned to activities more suited to a home environment. Reading can act as an escape to reality and the concerning issues we are facing in these pressing times, causing many people to start doing more often to fill up their time.

Based on a poll that 64 students filled out, 25% of those students read more books with the free time they’ve gained during the past 10 months.

Fantasy, realistic fiction and mystery novels were the most popular genres among those of the student body who filled out the Google Form. The average amount of books that students read during this 10-month period was 10. Burlingame students explored new books — from which they challenged themselves or even found their new favorite book.

Some students have struggled to find a book they would enjoy, so five students from grades 10, 11 and 12 recommended some of their favorite books that they have read during quarantine:

“Looking for Alaska” by John Green

For fans of realistic fiction

Synopsis: Miles “Pudge” Halter grew up with a normal, safe childhood — until he starts attending a boarding school where he meets irresistible Alaska Young. He is pulled into her new, exciting world and everything changes.

Rice enjoyed this book because it was relatable to teenagers. “This is the kind of book that I like. Those, like, realistic [books] and just about high schoolers, and I liked it because the storyline was just really good and it wasn’t too deep but had a good meaning… [it’s] really captivating and an easy read,” Rice said.

“A Court of Thorns and Roses” by Sarah J. Maas

For fans of Young Adult fantasy

Synopsis: Feyre, out hunting a wolf, is kidnapped by someone who takes her to the kingdom of faerie and soon realizes there’s more to her captor than what seems to be. While her feelings toward him turn from hatred to desire, she has to break an ancient curse in order to save him.

Geraghty recommends this book as she thoroughly enjoyed the characters and overall plot. “I just like the character dynamics… especially the main character Feyre. She kind of tackles a lot of, like, personal issues — like familial issues — and then, of course, she is the main character, so she has to save everybody else in this country called Prythian. So, like, she has to save them all from this lady who was trying to take over the world,” Geraghty said.

For fans of Young Adult fiction/romance

Synopsis: Eleanor, the new girl in town who sticks out like a sore thumb, and Park, the quiet boy who reads and listens to music in the back of the bus, slowly fall into an innocent love you can only experience when you’re young.

Sanchez enjoys the emotions you feel when reading this book: “I would definitely recommend this book because it’s pretty relatable and the events are really suspenseful and emotional… Park was a racial minority and he told us how it was difficult to fit in because his school was mostly white. I felt like I really related to him because, like, I know how hard it is when you feel like you don’t belong in a certain environment. The other main character is a girl who is really herself but feels like she’s judged by her peers at school, and I really love that she doesn’t feel bad for being herself,” Sanchez said.

“The Secret History” by Donna Tartt

For fans of mystery/psychological thrillers

Synopsis: After a young man transfers to a college in Virginia, he attends a Greek classics class and befriends an eccentric group of peers — only to become intertwined in a story of questionable morality and evil.

Canniffe admires the lyricism Tartt brings: “The way that it’s written is really — it’s beautiful… And also, because I usually read young adult fantasy, [something] more marketed towards adults that’s not fantasy — it’s definitely changed from what I’m used to reading and it was a really nice change because, just the way she writes, feels sophisticated,” Canniffe said.

“The Devil in the Dark Water” by Stuart Turton

For fans of mystery/thriller

Synopsis: In 17th century Europe, bodyguard Arent Hayes and detective Samuel Pipps are on a boat to Amsterdam on death row for a crime no one’s sure Samuel actually committed… until devilish and life-threatening acts start occurring and Arent is left to solve the mystery as to why they’re happening.

The plot, according to Morales, keeps you on your toes and has really interesting character development: “There’s a lot of twists and turns, and it really grabs your attention. Since it was 1634, women, obviously, were really put down and they had no say in anything… Sara’s husband abused her until she met Arent and learned to be strong. Arent also gains a lot of confidence with Sara too,” Morales said.

“Shoe Dog: A Memoir by the Creator of Nike” by Phil Knight
“Tough Love: My Story of the Things Worth Fighting For” by Susan Rice
“Vulgar Favors” by Maureen Orth
“Big Blue Sky: A Memoir” by Peter Garrett
“A Promised Land” by Barack Obama
“Is Everyone Hanging Out Without Me? (And Other Concerns)” by Mindy Kaling

“Red, White & Royal Blue” by Casey McQuiston
“The Key to Happily Ever After” by Tif Marcelo
“Call Me By Your Name” by André Aciman

“Thinking, Fast and Slow” by Daniel Kahneman
“The Art of Deception” by Kevin Mitnick and William L. Simon
“Life After Death: The Burden of Proof” by Deepark Chopra
“Sapiens: A Brief History of Humankind” by Yuval Noah Harari
“The Great Pretender: The Undercover Mission that Changed our Understanding of Madness” by Susannah Cahalan

“They Both Die at the End” by Adam Silvera
“The Hate U Give” by Angie Thomas
“On the Come Up” by Angie Thomas
“Alex, Approximately” by Jenn Bennett
“The Storied Life of A.J. Fikry” by Gabrille Zevin
“Aristotle and Dante Discover the Secrets of the Universe” by Benjamin Alire Sáenz
“All the Bright Places” by Jennifer Niven