The Burlingame B • April 29, 2021 • https://theburlingameb.org/4089/features/new-mural-promotes-unity-in-response-to-nationwide-hate-crimes/ 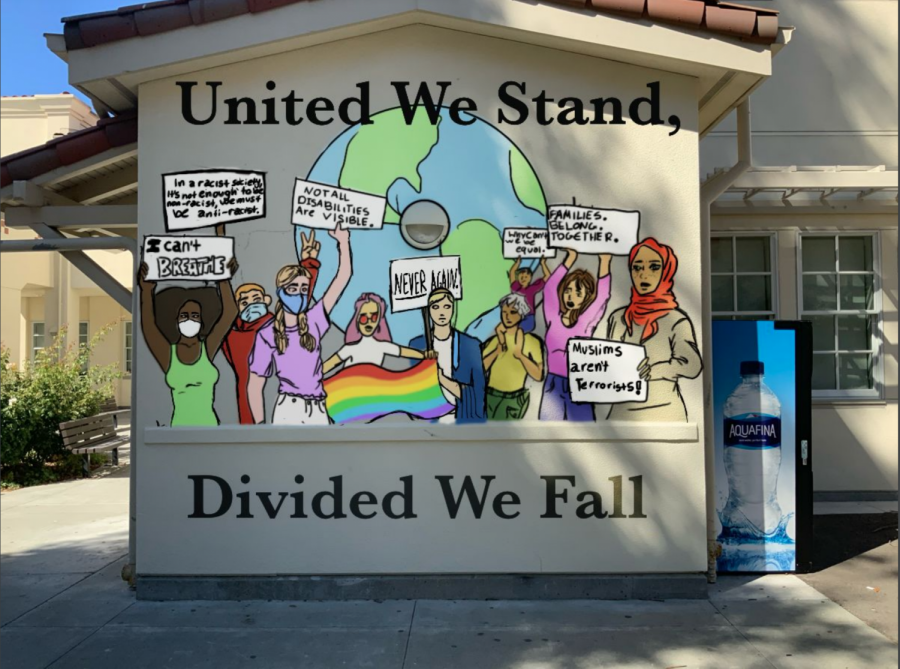 The BHS mural will be painted within the next two weeks. The BSU has started outlining this mural with various volunteers after choosing this mural to paint from the competition they held. This one was designed by two freshman burlingame students and was chosen from 15 other contestants.

In light of antisemitic vandalism at Burlingame, Black Lives Matter protests and rising hate against Asian and Jewish Americans, unity has become crucial to the safety and wellbeing of Burlingame students. The incidents of hate which have occurred at the school and nationwide have caused division between students and members of the Burlingame community, requiring inclusivity, equality and trust.

The Burlingame Black Student Union (BSU) proposed and is in the process of completing the new addition of a mural on the wall that was vandalized in September 2020. This mural will reside on one of the various walls that have been vandalized in the past. This mural will be fully painted in two weeks. Students are also encouraged to help with the painting process in any way they can.

“This mural would be a more lasting effect, and help kids deal with some of the obscene messages that they unfortunately had to see,” BSU president Tyler Johnson said in reference to the vandalism that took place on campus in 2020.

Johnson’s goal with the mural is to ensure that students feel supported and welcome in their own school. He wanted to establish a permanent message that students here are a unit, devoid of bias and stereotypes.  A safe space where students are not frightened of judgement on their race, sexuality, disability or ethnicity in any way.

“I hope [the mural] becomes a symbol that we recognize as the kind of the school culture in the community that we strive for. One that is mutually respectful of each other and empathetic towards different experiences. And ultimately, something that projects us forward to [be] even better than we are today,” principal Paul Belzer said.

Belzer and the school administration have been figuring out ways to create an environment of inclusivity and welcome diversity in every way.

“Teachers are looking to bring different voices into the curriculum. Again, different instructional practices to kind of make certain that the class is more equitable,” Belzer said.

The district has implemented a mandatory ethnic studies class as of this school year, replaced AP European History with AP World History for the upcoming school year, and has altered the books in English courses to fit different perspectives and highlight different narratives.

This mural will represent the student’s and community’s initiative to unite and thrive together going forward.