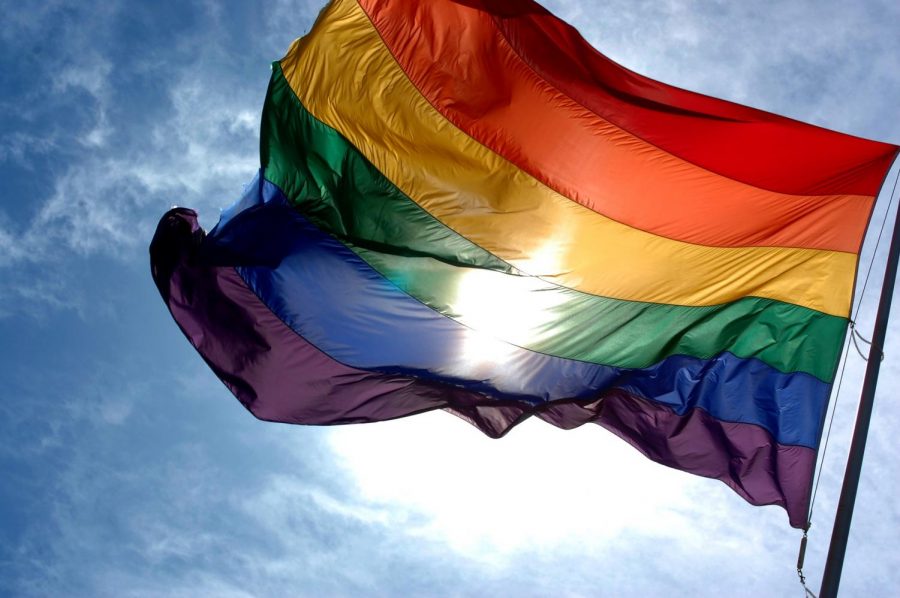 On Thursday, May 20, the SMUHSD Board rejected a proposal to fly the LGBTQ+ pride flag during the months of June and October.

On Thursday, May 20, the San Mateo Union High School District (SMUHSD) Board held their last meeting of the school year. Superintendent Dr. Kevin Skelly recommended the motion to approve a proclamation recognizing June as LGBTQ+ pride month in the SMUHSD. There was also a request to fly the pride flag at all seven high schools in the months of June and October, which are also known as LGBTQ+ pride month and LGBTQ+ history month, which was denied.

The Board was quick to pass the proclamation, but the decision to raise the flag led to a lengthy debate. For nearly twenty minutes, Board members Robert H. Griffin, Peter Hanley, Linda Lees Dwyer and Ligia Andrade Zúñiga debated whether or not the pride flag should be flown. Hanley voted no, for he believes that the importance of the American and California flag would be diluted if placed next to others.

“The flag poles at our schools are really for the national flag and the state flag … they’re not billboards for various groups,” Hanley said.

Hanley and Griffin alike fear that by flying the rainbow LGBTQ+ pride flag, other groups might come to the Board and ask for their flag to be flown as well, creating a never ending cycle. On the other hand, Andrade Zúñiga and Dwyer voted yes to raise the flag and welcome the prospect of adding more flags to the pole.

“I think if another group wants to raise their flag …then I don’t have any problems putting their flag up [as long as] it’s an approved student organization,” Dwyer said.

Dwyer, quick to support the raising of the pride flag, was taken aback by the controversy surrounding the flag, as she expected the Board to easily pass it.

“These kids are part of a bigger thing, I mean the month of June is big … it’s a national recognition … that is supported by the city council and county government and state of California, so why would we not do something similar to what other state entities are doing?” Dwyer said.

Although government buildings across the county and state may fly pride flags during June, Hanley remains set on the SMUHSD Board to not do so.

While the Board’s decision was rooted in preserving the authenticity of the flag pole, the LGBTQ+ community at Burlingame was disappointed. Kimberlly Baldwin, rising president of Burlingame’s Gay-Straight Alliance (GSA) club, felt disrespected by the refusal to raise the pride flag.

“I think it’s a really weak argument to say ‘what’s next?’ What comes after one flag? I don’t know, you represent more people?” Baldwin said. “Isn’t it time to acknowledge such a big group in America?”

Baldwin noted that she forwarded the Board meeting, which is available to watch on YouTube, to other members of the GSA and talked to them about how they felt.

“A lot of members of the GSA just felt … put down. They felt like, ‘okay then what is the point of having this club if we can’t get represented [by the District]? Then what are we doing? What’s our goal? What’s the district’s goal?’” Baldwin said.

Despite the initial defeat, Baldwin was appreciative that the Board invited representatives from the GSA at each high school to meet on Monday, May 24 to talk about ways the District can be more supportive. However, she felt this action was slightly performative seeing that they were not supportive of the LGBTQ+ community earlier when they refused to fly the pride flag.

“I think they’re just lacking a lot of self-reflection and are trying to compensate by asking, ‘what else can we do better, because we didn’t want to do that thing,’” Baldwin said.

Principal Paul Belzer also recognizes that this decision has hurt the LGBTQ+ community and is working to ensure they feel accepted and welcomed at Burlingame.

“I want our students to know that their feelings or concerns … are valid,” Belzer said. “[But] I’ve participated in Board meetings for 15 years and … I think I can say confidently that they would never want any of our students to be hurt by their comments.”

While Burlingame may not be able to fly a pride flag, Belzer wants to find other ways to show the LGBTQ+ community that they are seen and supported.

“The word performative has become more widely used, and [I] want to make certain that [Burlingame] is matching the authentic efforts with the symbolic efforts,” Belzer said. “I think we as a school need to continue to make certain we are doing everything we can to [ensure] that the school represents and speaks for our different student groups on campus and that it’s ultimately a safe and supportive environment for all our students,” Belzer concluded.