The Burlingame B • August 24, 2021 • https://theburlingameb.org/4196/features/climate-rally-links-youth-advocates-and-local-politicians-in-favor-of-carbon-fee/ 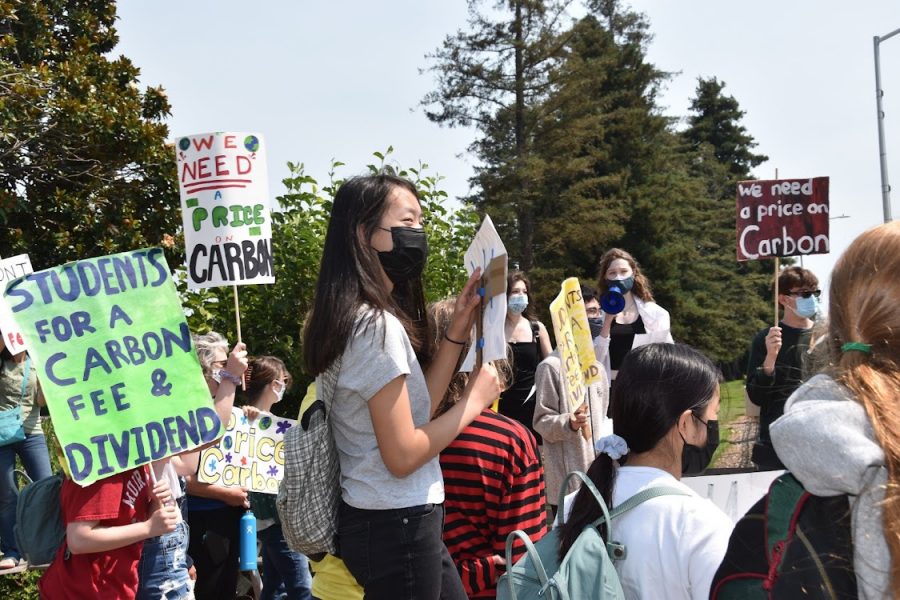 Attendees of the “Students for a Carbon Fee & Dividend Rally” raise colorful signs on the corner of East Fifth Avenue and El Camino Real on Saturday.

“We are unstoppable; another world is possible.”Climate advocates echoed this chant throughout San Mateo Central Park on Saturday afternoon at the “Students for a Carbon Fee & Dividend Rally.” Environmentalist attendees marched up El Camino Real hoisting hand-painted signs en route to the heart of the park for a series of speeches from local government officials and student activists.

Citizens’ Climate Lobby (CCL) San Mateo Youth, the rally organizer, is one of 591 active chapters across the country. The main goal of CCL is to implement a carbon fee, which would be collected anytime a fossil fuel is purchased. According to the United States Environmental Protection Agency, carbon emissions account for 80% of all U.S. greenhouse gas emissions, so CCL hopes that the carbon tax legislation could generate enough revenue to fund monthly dividend checks to the American people.

The Energy Innovation and Carbon Dividend Act of 2019 was introduced to the House of Representatives, but it did not receive a vote. The act intended to set an economy-wide price on carbon, expecting to bring America’s carbon pollution to net-zero by 2050.

“The point of this demonstration is to demonstrate to these leaders that their constituents care about climate change and it’s something they need to act on,” CCL San Mateo Youth Lead Róisín McElarney said.

McElarney, joined by 19 other student volunteers from CCL San Mateo Youth, spent more than a year organizing this demonstration. To follow COVID-19 protocol, face coverings were required, and many sported CCL-provided disposable masks with “Carbon Fee and Dividend” Sharpie-printed on them.

While marching on the sidewalk, multiple maskless onlookers picnicking inside the park urged the advocates to remove their masks and breathe the air they were fighting to protect. In the second trip up El Camino Real, the group chose not to walk the full block and engage in discourse with the anti-maskers. Instead, they lined up facing the passing cars. Some drivers honked in support of the cause while others stared silently at the traffic light.

After marching, the group that had grown to approximately 100 participants migrated to the outdoor stage attached to the Central Recreation Center building to browse numerous climate causes at information tables and hear from local politicians and activists.

California State Sen. Josh Becker, one of the six scheduled speakers, spoke on how the importance of protecting the environment motivated his 2020 run for state senate. By supporting the Carbon Fee and Dividend, Becker continues to endorse decreased fossil fuel usage.

Burlingame senior Elsa Lawrence was also present at the rally, holding a sign that said “Join the Climate Revolution” and marching alongside her sister and CCL member, Ruby.

“[I believe] we need a price on carbon because it’s killing our planet, and the dividend part is supporting the people that are going to be the most affected by the change,” Lawrence said.

While there is no clear timeline for this legislation, rally participants vow to continue defending the climate.

“The good thing about the future is that it’s not set in stone like the past … the future ahead of us is the one we are willing to fight for,” Carlmont High School student and CCL San Mateo Youth member Aran O’Sullivan said.

*Correction: An earlier version of the story was factually incorrect, and has since been revised.