The Burlingame B • August 31, 2021 • https://theburlingameb.org/4203/showcase/girls-tennis-team-undergoes-cuts-for-the-first-time/ 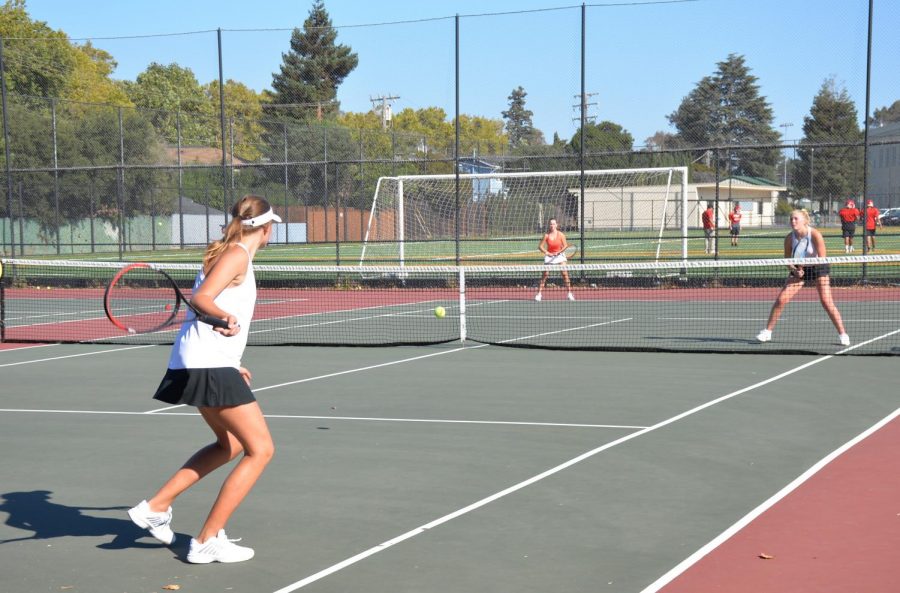 Sophomore Lily Grenier and juniors Malia Schmidt and Spencer Dobos play doubles against each other at practice on Thursday, Aug. 26.

For the first time in Burlingame girls’ tennis history, coaches made cuts to the roster, only taking 30 of the students who tried out.

“We officially had 78 players on the roster, but we had interest from a few more, so we might have had around 90 players whose names we dealt with,” head coach Bill Smith said.

Having to make these cuts created some challenges for players.

“[Tryouts] were a little stressful, and I was really nervous and tense the entire time,” freshman player Ella Wang said. “But, it also was really fun. It was great to get to know the girls, and it was a great way to meet new people. It also was a good way to get playing and practice time in.”

Despite the stressful nature of tryouts, players still managed to have fun and socialize.

“It was competitive, but it wasn’t a negative-energy kind of competitive. There was more of a supportive vibe to it,” Wang said.

There were many factors that played into the decision of having a smaller team. A leading reason was the limited court space. In standard matches, there are singles (1-on-1 games) and doubles (2-on-2 games). In previous years, the larger team did not have adequate space for all athletes to play between the eight tennis courts. Now, with a roster of 30 players, all athletes are able to play simultaneously during practice.

Smith and the coaching staff also made the decision in hopes of creating a more competitive environment.

“In our athletic department, there had been a lot of discussion about honing our teams to a group that was competitive high school players, and not having a more recreational level to our sports,” Smith said. “There was a lot of input from parents feeling that the coaching staffs, in general, were spending more time with the lower-level players than with the varsity players.”

Smith determined which players to keep on the team based on their competitiveness and athleticism. In addition to balancing grade levels on the team, Smith considered the players’ ability to meet school, athletic department and team expectations.

“Anything they lacked in skill or innate talent was over-matched by their zeal to remain on the squad,” Smith said.

Burlingame’s girls’ tennis has their first match on Tuesday, Aug. 31, a home game against Lick Wilmerding High School. The team’s players and coaching staff have high hopes for this season.

“We’re pretty optimistic [about the 2021 season]. Our team is looking really strong, so I feel like we’ll be really successful. Hopefully, we’ll be able to make it to the [Central Coast Section],” senior player Molly Wachhorst said.