The Burlingame B • January 16, 2022 • https://theburlingameb.org/4450/features/unity-in-the-community-town-hall-presents-capuchino-mural-touches-on-social-justice-and-hate-speech-in-the-district/

Unity in the Community Town Hall presents Capuchino mural, touches on social justice and hate speech in the district 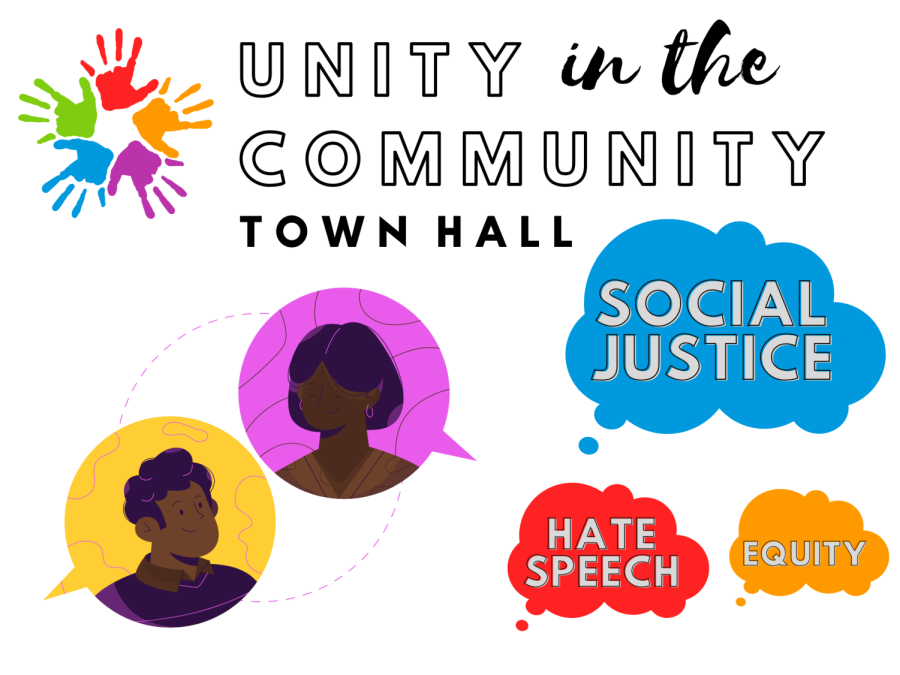 Teachers, parents, administrators and SMUHSD Board members attended the Unity in the Community Town Hall on Jan. 11 to share and hear perspectives on social justice, equity and representation for Black students.

On Tuesday, Jan. 11, the Black Parents Association held the second Unity in the Community Virtual Town Hall of the school year, with presentations from Black Student Union (BSU) leaders across the San Mateo Union High School District (SMUHSD), feedback on support for students of color and an introduction to a pilot social justice class at Aragon High School.

The meeting opened with an “Amplified Voices” presentation, including a feature on the new Black Lives Matter mural at Capuchino High School.

“I believe the mural created an environment where people are more open to talking about race, especially concerning the inequities and injustices around minorites and certain types of people, as a result of racism and discrimination,” Abdelgadir said. “I believe it just gives us a platform to show who we are — to show what we believe.”

Demonstrating the real beliefs and values of the Black Lives Matter movement — “cutting through all the misinformation,” as Abdelgadir said — is also a central theme of the mural. Abdelgadir also added that the mural helps to lighten up the Capuchino campus with shades of bright yellow, purple and blue.

Lindsay Bussey, an English teacher at Aragon, followed the student activists with a brief summary of a pilot course she co-teaches, titled “Agency and Social Justice.”

The inspiration for the year-long class, which is taught in a seminar-like format, came from the youth who now take the course and their activism following the murder of George Floyd in May of 2020. Bussey and her co-teacher, Jerrica Keane, were excited to channel that activism into the classroom, giving students the resources, knowledge and platform they need to push their advocacy forward.

“Challenge each other. Learn from each other,” Bussey said. “Be inspired by each other. And question what you think and why you believe that — whatever it is that you believe. Is there more that you can learn? And the answer is always yes.”

The town hall closed with a heavy conversation on hate speech, on and off school campuses. After Superintendent Kevin Skelly shared insight into a recent hate incident involving a SMUHSD student, parents and teachers felt compelled to voice their own stories and experiences. One parent asked that the district prioritize transparency in such circumstances, while another demanded punitive consequences for students involved in hate speech. Trustee Robert Griffin, also present at the town hall, advocated for action from the SMUHSD Board of Trustees at their next meeting, which will take place on January 20.

“In actuality, if you take this little slice of heaven we’re living in, things are not any better,” Griffin said. “And we need to reexamine this. Because this has a tremendous impact on people’s self-esteem, on the way they conduct their daily lives.”