The Burlingame B • February 15, 2022 • https://theburlingameb.org/4520/features/the-man-behind-peter-umland-stadium/

The man behind Peter Umland Stadium 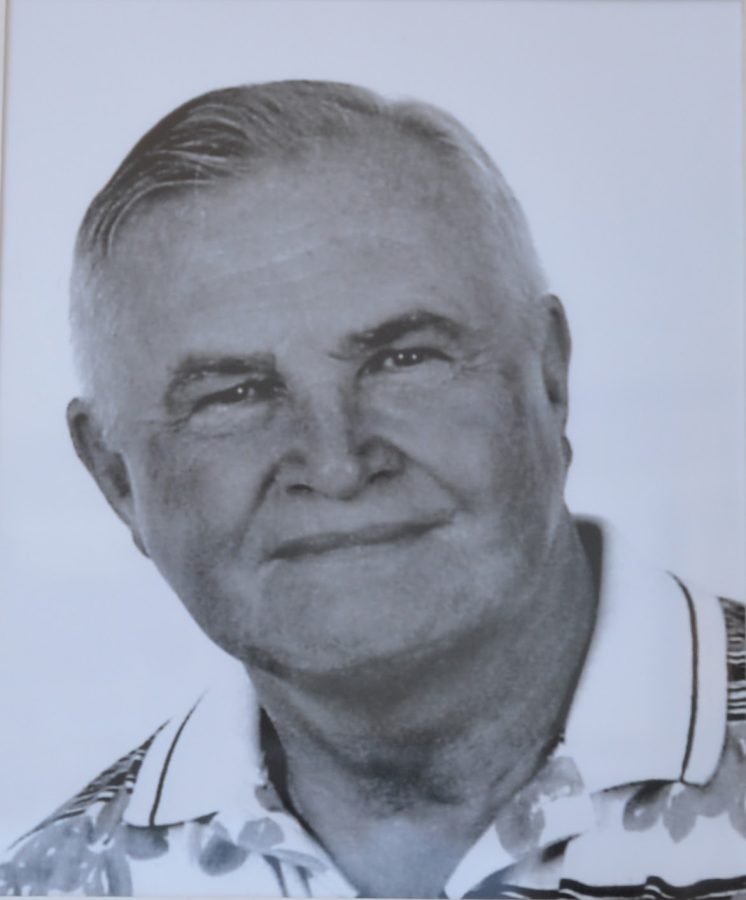 A man known for his philanthropy, Peter Umland and his wife Dolores Umland made the San Mateo Union High School District a residual beneficiary under the Umland Charitable Trust.

Burlingame’s previously unnamed stadium is filled with memories of runners going the distance, graduations and eight Little Big Game victories, all overlooked by a scoreboard reading “Peter Umland Stadium” since 2014.

Part of Burlingame’s class of 1954, Peter Umland passed away suddenly from a heart attack on Sept. 18, 2001 at age 66, shortly after winning Alumni of the Year.

Born July 30, 1935 in Cambridge, Mass. and moving to Burlingame in 1939, Umland attended McKinley Grammar School. He later enrolled at Burlingame, but as his younger sister Diana Umland Bos wrote in a tribute to Umland, there is more to the story behind his high school years.

“When Pete was barely making passing grades as a junior at BHS, he decided that he wanted to join the US Navy, so he quit BHS,” Bos said. “He went to the recruiting office in SF and was turned down because they had so many draft-age boys, they couldn’t take him. He was sorely disappointed.”

Upon Umland’s decision to drop out, his parents said, “Either go back to high school or get a job.” Wanting no part in returning “to the hallowed halls of BHS,” Bos said, Umland would get a job as a lumber clerk in South San Francisco.

“It dawned on him after a while that lumber clerking might easily be the height of his professional career unless he had more schooling. So he enrolled in a correspondence high school class and earned his ‘diploma’ after studying very hard at night at home,” Bos said. “I don’t know how genuine that diploma was, but at least he had one.”

Once becoming draft-eligible, Umland served in the U.S. Navy as an aerial photographer from 1953 to 1956. Following his military tenure, he continued on to College of San Mateo, during which time the Burlingame Police Department hired him as a patrolman until 1958. Umland then joined the California Highway Patrol and retired as a sergeant in 1980.

After his retirement, Umland became the owner of the Burlingame Smoke Shop “where he worked and greeted his friends every day,” Bos said. Around that time, he also grew interested in distance running and took part in marathons.

Current assistant and previous head track and cross-country coach of 29 years, Steve O’Brien, known as “Obbie,” met Umland at a running store and was among a slew of those in the community who honored him at his memorial service.

“He always kind of had a feel that he wanted to work with young people, but he never knew how to really get in,” O’Brien said.

Umland would fulfill that calling as a volunteer track and cross-country assistant, coaching at Burlingame for around eight years.

“Peter and I coached together, and we were friends together. He was a wonderful contributor to Burlingame athletics,” O’Brien said. “He used to help with other kids that didn’t have shoes, bags or sweats. He did that not only at Burlingame High School, but through the Peninsula Athletic League.”

Described as “our Big Papa” by O’Brien, Umland also gave words of wisdom to Burlingame’s student athletes, as a loving mentor would.

“I remember distinctly when 9/11 happened — we gathered on the baseball field and he gives this beautiful articulation of a man having previous history with the United States and what that meant to him. He just captivated this audience of high school kids and it was just so magnificent the way he was so present with [them],” O’Brien said.

Under the Umland Charitable Trust, Umland and his wife Dolores dually made the San Mateo Union High School District a residual beneficiary for use in Burlingame’s athletic endeavors.

Umland’s giving nature was displayed about a week after then-Principal Gerald Arrigoni had taken office. In 1997, he funded the removal and replacement of the old track with an all-weather track totaling almost $250,000.

“That just spoke to the man he was. He would have given you anything,” O’Brien said. “The district benefited not just financially, but more by his coaching, his relationship with young people.”

After the stadium’s bleachers were completed during renovations in the fall of 2014, the District’s Board of Trustees approved the title — a nod to a man whose presence preceded his name.

As for the diploma that Umland never got from Burlingame, that would change in 2001 when he was presented with Alumni of the Year.

“He didn’t know quite how to handle the honor because he had to admit that he had never graduated from BHS. So the night of the award, Principal Arrigoni and others bestowed upon Pete a genuine Burlingame High School diploma.! He couldn’t have been more pleased,” Bos said.

Formally recognized as a Panther graduate in his 66th year, Umland’s philanthropy was often dedicated to the high school athlete.

“It was always about someone else and not Peter,” O’Brien said. “His spirit and the soul he gave out of just total love and respect… it was magic.”